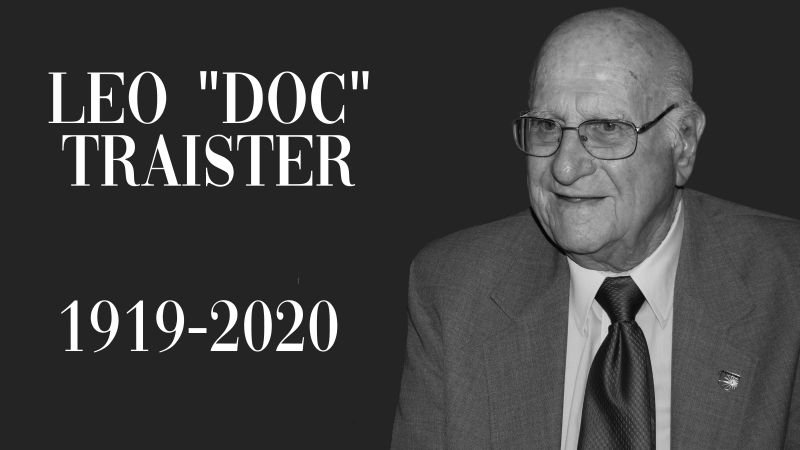 EUREKA – With the passing of Leo "Doc" Traister at age 101 on Saturday, Eureka College lost an irreplaceable legend.

"The EC community has, once again, been devastated after the loss of Doc Traister, another unforgettable icon and amazing human being who lived 101 years," EC President Dr. Jamel Santa Cruze Wright said. "He touched and shaped so many of us with his kindness, care, humor, mentorship and friendship. He will be missed and his Eureka College legacy will be a noted presence on our campus for many generations to come. We are thankful for the Traister family and will continue praying for them and celebrating the extraordinary life of Doc with them."

Born in Rock Falls, Illinois, on Sept. 9, 1919, Doc first came to Eureka College as a student in 1939 and participated in a variety of sports, earning four letters in baseball, three letters in football and two letters in track. Though he left in 1941 to serve in the military, Doc returned in 1946 and graduated in 1948.

In 1966, he came back to Eureka to take over as Director of Athletics. In addition, he was the head football and basketball coach and the school's only physical education professor.

In his tenure, he brought to life to new golf, track and intramural programs and revamped the physical education curriculum at Eureka. He was also proud to oversee the growth of women's programs at EC.

However, he remained on various coaching staffs until as late as 1990. When he finished his tenure as head basketball coach in 1974, he was EC's all-time wins leader with 168. Three years later, he was inducted into the Eureka College Athletics Hall of Fame.

Another Red Devil Hall of Famer, Craig Gerdes, played basketball for Doc for three years and was captain of the 1970-71 squad before embarking on his own monumental career as a coach, educator and announcer.

When Doc retired as athletic director, he told The Pantagraph that, even though Doc had so much on his plate, he always made time for his players.

"You never felt like you were imposing on him when you went in to see him," Gerdes said. "He had time for you whether you were a starter or the 12th man on the team.

"He was the type of guy I learned to appreciate more after I graduated than when I was there for the qualities he instilled in young individuals."

Doc, along with his late wife, Betty, was an avid Red Devils fan and donor of the college long past his coaching days.

He was a frequent visitor at EC's various athletic facilities, and just last winter, he delivered a video testimony as a part of the development office's donor outreach efforts.

"I am 100 years old and I have given to the college financially for almost all of those years," Doc said. "I think Eureka College is a wonderful place and needs support from each and every one of us, so it can continue to be a fine institution for the young people coming up."

Over the years, tributes and commemorations in Doc's honor have become regular occurrences at EC sporting events.

In 2007, Eureka College opened its first soccer facility and named it "Traister Field." It was officially dedicated to Doc during a ceremony in 2008.

In 2014, a new plaque was mounted on the north wall of the McKinzie Field to honor his dedication to Eureka College.

Last fall, EC celebrated Doc's 100th birthday by honoring him with a special coin toss before a home football showdown between Eureka and MacMurray.

Doc harbored an incomparable wealth of institutional knowledge 'neath the elms, and was present for more Red Devil memories than anyone.

EC Director of Athletics Bryan Moore said in 2019 that Doc "personifies all that is good about Eureka College athletics and has been a mentor to generations of students."

"I truly feel blessed to have had the privilege of coming to this institution and I continue to feel that way," Doc said in a 2015 interview to celebrate the renovation of the Reagan Athletic Complex. "Each time you come back, you see improvements you never would've imagined would take place, and it just makes you feel proud that you were a part of this institution, and the future is just outstanding."