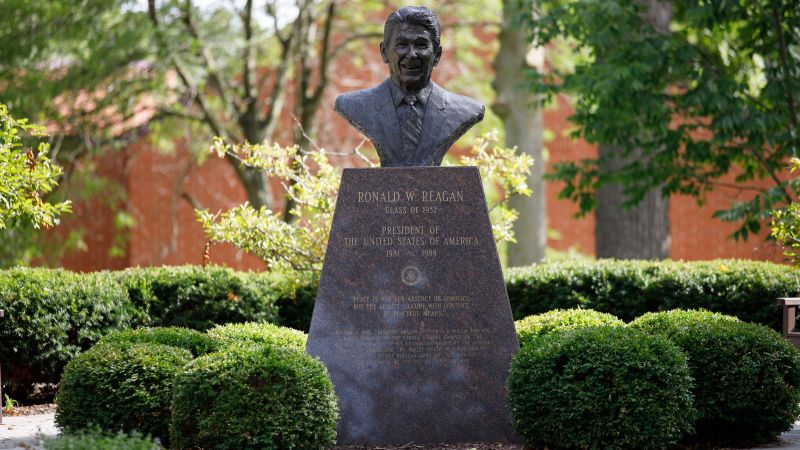 EUREKA — Eureka College is proud to announce the four freshmen from the class of 2026 who have been chosen as Reagan Fellows in the Ronald W. Reagan Leadership Program.

The new Reagan Fellows are Kaleb Brown of Auburn, Illinois, Joel Ewald of Roscommon, Michigan, Claire Schaffner of Delavan, Illinois, and Tatum Trotter of Springfield, Illinois. They were chosen out of a group of 57 semifinalists.

The award, based on leadership, service and academic excellence, includes a full-tuition scholarship over four years, as well as global travel and professional mentorship opportunities.

At Auburn, Brown was on the high honor roll. A four-year varsity member of the football team and a captain during his senior year, Brown was also an active volunteer in his community, participating in Auburn Helping Hands and Trojans Food for Kids. He is also interested in mentoring, fitness, and music production. Brown plans to study criminal justice/sociology and play football at Eureka.

Ewald was an accomplished and involved student at Roscommon High School. He was on the school’s honor roll for four years, received the RHS Scholar Athlete Award and the Roscommon High School Third-Year Academic Award, and was a member of the National Honor Society. A three-sport athlete, Ewald played basketball and was a First Team All-Highland Conference honoree, and ran cross country and track. He was also on the quiz bowl team and participated in concert and marching band. He has volunteered with the Special Olympics, Kids Helping Kids, Good Shepherd Community Dinner, Breakfast with Santa, among other community services. At Eureka, he plans to play basketball and study business administration.

Schaffner, who plans to study psychology at Eureka, has previously participated in a wide range of academic and extracurricular activities and sports at Delavan High School. An honor roll student, State Scholar and National Honor Society member, she was a varsity captain of both her volleyball and softball teams. She was active in the Drama Club, was a class representative in student council, was involved in Fellowship of Christian Athletes, was on the Tazewell County Youth Board, and participated in Girls State.

Schaffner has also volunteered for the Youth Group Community Service, Imago Dei Nursery and Jolt Harm Reduction and The Delavan Times. In May, she will graduate at the top of her class.

Trotter’s academic and athletic career at Glenwood High School has been full of honors and achievements as well. Along with being on the honor roll and a member of the National Honors Society, she was named to the 2020-21 Congress of Future Medical Leaders and was nominated to participate in the National Youth Leadership Forum on Medicine.

A captain on her high school and club softball teams, Trotter received IHSA All-State Honorable Mention and was selected the Class 3A Capital Area Softball Player of the Year after Glenwood made a run to the Elite 8 in 2021. She has also received recognition for her artwork, and has been an active volunteer in her community. Trotter, who will be joining the Red Devils’ softball team, plans to study biology, neuroscience and art, with the intent of pursuing a career in prosthetics and/or medicine.

The Reagan Leadership Program is in its 38th year. Long before he was the 40th president of the United States, Ronald Reagan was a vital member of the Eureka College community and a graduate of the 1932 class.