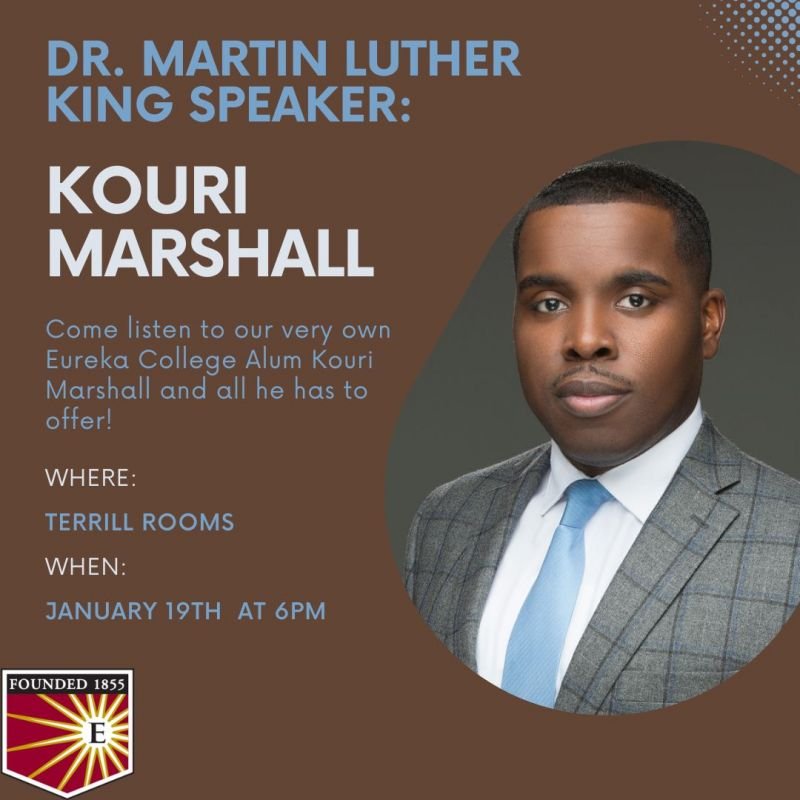 EUREKA, Ill. – Eureka College is pleased to announce that Kouri Marshall – Director of State and Local Government Relations Central Region for the Chamber of Progress and a 2005 EC alum and board trustee -- will be the keynote speaker at EC’s Dr. Martin Luther King Jr. program on Thursday, Jan. 19.

The program, which is presented by the Eureka College Inclusive Excellence Committee, will take place inside the Terrill Rooms of the Donald B. Cerf Center at 6 p.m., will discuss the leadership legacies of both Dr. King and President Ronald Reagan, and redefining the American dream. The event is free to attend and open to the campus community and the public.

“Of all the decisions I’ve made in my life, choosing to attend Eureka ranks in the top 1%,” Marshall said. “I learned a lot about being a leader on that campus and I am excited to give back to an institution that gave so much to me.”

A Peoria native and Chicago resident, Marshall recently spent 2 1/2 years serving as the Deputy Director of Agency Personnel and Executive Appointments in the Office of Illinois Governor J.B. Pritzker. Prior to that, he was the Chief of Staff to Cook County Commissioner for the 1st District, the legislative and public policy body of the second-largest regional government in the United States with a $5.36 billion annual budget. He also previously served as the District of Columbia’s State Director for President Barack Obama’s re-election campaign, and was the Executive Director of Democratic GAIN, a progressive political association with 42,000 members.

“We are exceedingly proud to count Kouri Marshall among the amazing alumni of Eureka College. We are thrilled to have Kouri join us to speak on Dr. Martin Luther King’s legacy,” stated Eureka College President Jamel Wright.  “His success in leadership and service is a true testament to the statement that you can truly begin here and go anywhere.”

At Eureka College, Marshall was the first African-American Homecoming King in the history of the College. He received the Eureka College Outstanding Young Alumni of the Year award in 2013, and became a member of the Board of Trustees in 2022.

Marshall was also the recipient of Campaigns & Elections Magazine’s 2016 Rising Star award, one of the political industry’s most prestigious honors. A member of the Boys & Girls Clubs of Chicago’s Young Professionals Board of Directors and the Loyola Hospital Chicago Gun Violence Committee, Marshall received his master’s in Public Administration at Southern Illinois University, Carbondale.

“I grew up in public housing in Peoria, Illinois, during the formative years of my life, so I always have the hope that my life example sends the message, to young people in hoods everywhere that anything is possible,” Marshall said.